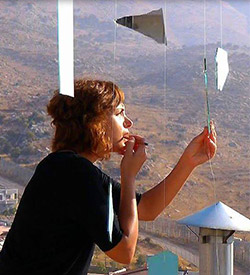 Randa Maddah
b. 1983, Majdal Shams, occupied Syrian Golan). After finishing courses in painting and sculpture at Adham Ismail Center, Damascus in 2003, she graduated from Damascus University, the faculty of fine arts, department of sculpture, 2005. In 2007, Randa also took etching courses at the Academy of Arts and Design in Jerusalem. Her work has been described by John Berger as ‘There is a power in this work (Puppet Theater) such as I have seen in no other. It has claimed the ground on which it is standing. It has made the killing field between the aghast spectators and the agonizing victims sacred. It has changed the floor of a parking lot into something landswept’. Randa is founding member of Fateh Al Mudarris Center for Arts and Culture, occupied Golan Heights, which is the only art space dedicated to contemporary art and art education in the occupied Syrian Golan Heights founded by young artists.
Randa has participated in many solo and group exhibitions, some of which are: Earth-Brown, Umm El-Fahem art gallery, Umm El Fahem 2010; On The Road, majdal shams streets, the Golan Heights (2010); On The Gates Of Heaven, Al Ma’mal Art Foundation, Jerusalem (2010); Open Studio Group exhibition, Khalil Sakakini Cultural Centre, Ramallah (2010, 2011, 2012); Space, The Ethnographic Art Museum, Birzeit University (2010); Pyrate Realations, M³ Kunsthalle Galerie Berlin (2012); Light Horizon, Mediterranea Biennial 16, Ancona, Italy (2013); Festival del film, Locarno, Switzerland (2013); This Place has no mirrors but only your thoughts in the water and they will spread all around with the waves, Galleriet, Umea, Sweden (2013); Mediterranea Biennial 16, Fabbrica del Vapore, Milano, Italy (2014); The 2d International Encounters of Arab cinema, Marseille France (2014). In 2015 Randa exhibited her project “pencil on pepper” in Europia – new art gallery, Paris, France.