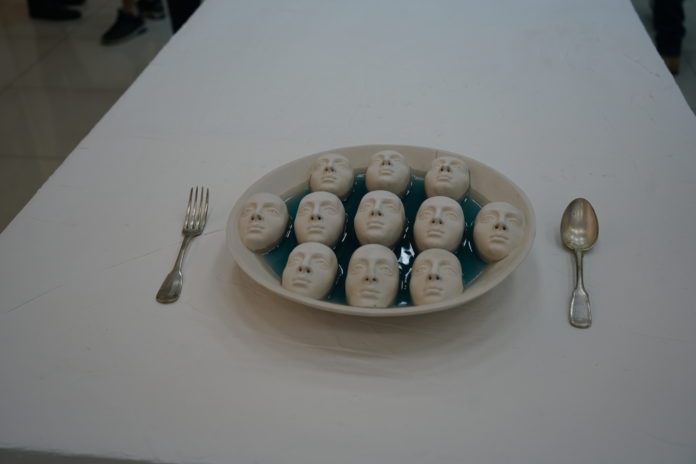 A section of Instinct & Intelligence by Vahram Galstyan (Karoyan Gallery), 2017, on display at the fair (Aram Arkun photo)

YEREVAN and BOSTON — Armenia had its first international art fair, Armenia Art Fair, from May 11 to 14 at the Yerevan Expo Center. Coinciding with a historic period of peaceful revolution in Armenia, it represented a sea change in the Armenian art world. Although the art fair format, with its combination of exhibition and market place, is well known in the United States and Europe, it is something completely new for Armenia.

Armenia Art Fair showcased the works of over 20 solo artists and 19 galleries from Armenia, the Black Sea region, Europe and the Middle East. It is the first in a projected annual series, intending to connect Armenia and international art and artists, and make Yerevan a regional hub for the arts.

A series of cultural events were organized during the fair. The opening night included a musical performance by Swiss performer Christian Zehnder. The next few days included a lecture-performance by “The Slavs and Tatars” art collective courtesy of the Goethe Institute; a fashion performance inaugurating an exhibit of the paintings of Narek Barseghyan organized by the HAYP Pop Up Gallery; and a panel discussion featuring Austrian art critic and curator Georg Schoelhammer, director of the Art and Cultural Studies Laboratory Susanna Gyulamiryan and Director of the Institute for Contemporary Art Nazareth Karoyan, with moderator Dr. Randall Rhodes from the American University of Armenia. 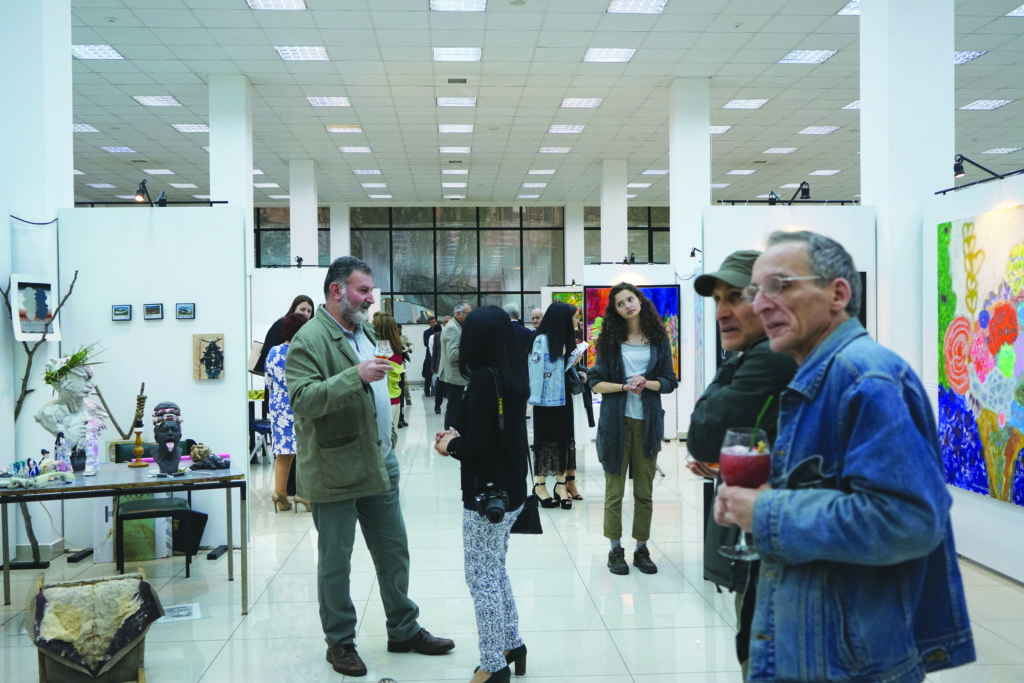 A view of the main floor of the Armenian Art Fair (photo: Aram Arkun)

Approximately 700 guests and 2,000 visitors were in attendance, with 10 works sold to private buyers and 5 commissioned. Visitors including prominent cultural figures, actors, politicians and even the current president of the Republic of Armenia.

At the opening, fair cofounders Nina Festekjian and Zara Ouzounian-Halpin welcomed the guests. It was a trilingual affair, with Ouzounian-Halpin speaking in Russian and Festekjian in English, with translation into Armenian. United Nations Resident Coordinator and United Nations Development Program Resident Representative for the Republic of Armenia Shombi Sharp, speaking in English with an interpreter translating into Armenian, declared that the UN is interested in this event because art is an effective tool to address global challenges and transform the world. He congratulated “the Armenia Art Fair team for creating a breakthrough — something fresh, something dynamic here in Armenia.” 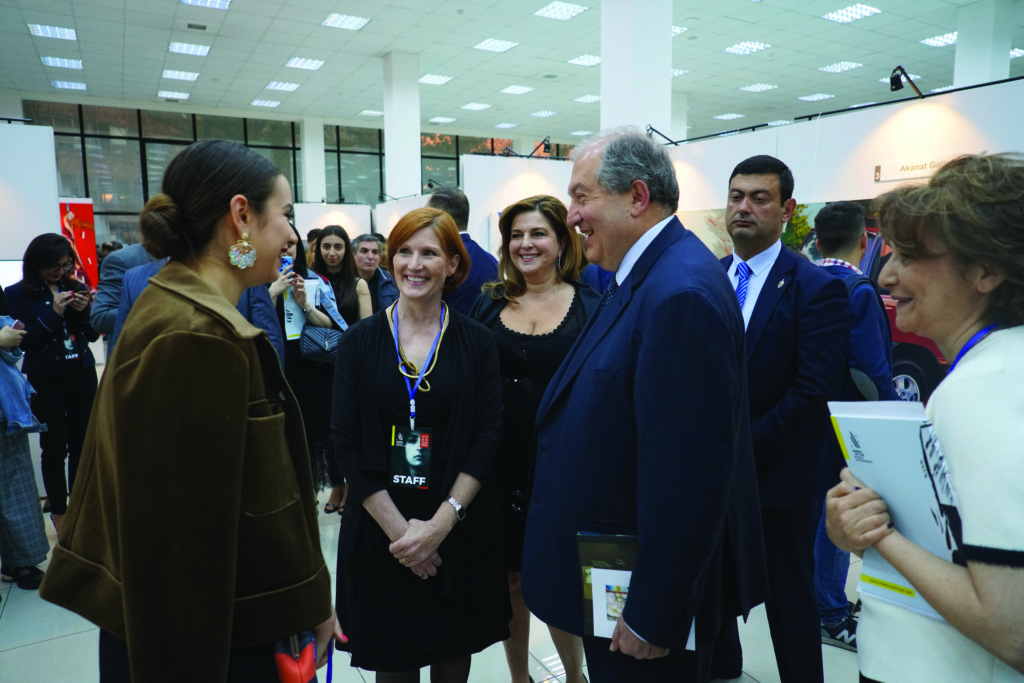 From left, Lizzy Vartanian, a curator and art blogger from the United Kingdom who is a member of the Armenia Art Fair team, Sarah Watterson, also a team member, Nina Festekjian, President Armen Sarkissian of Armenia, and at the far right, Zara Ouzounian-Halpin (photo: Aram Arkun)

During an interview in Boston after the fair was over, Festekjian declared that the art fair idea had a long gestation period. She knew her co-founder Ouzounian-Halpin for a long time, and some four years ago worked on the art exhibit at the Armenian Tree Project’s 20th anniversary celebration together. Festekjian said, “When Zara approached me and asked whether I would be interested in embarking on such a project, I really loved the idea. Always having had that art background in me and wanting to do something in Armenia to help the people and the infrastructure, this was the perfect project for me….We had this vision that it should be at a high caliber and scale.” Over the past two years, the two were constantly communicating and planning.

Ouzounian-Halpin in turn explained that it was a very complex project, and even deciding when and where it should be held took much effort. They established an organization called Aragil Art Foundation which is nonprofit, and this foundation produced the art fair. They put together a team for the work, which turned out to be seven women plus one man, an internet technologies specialist. Each person is a specialist in her own field.

The Yerevan Expo Center on Hakob Hakobyan Street was chosen as the venue. Though it is somewhat distant from the center of the city, it was designed for expos, meaning that services like electricity and internet would be available. Then the team had to reach out to galleries and artists through networking. All participating artists had to have representation.

Ouzounian-Halpin said that at first, “everybody was watching to see how serious we are.” She continued, “It was the right time and the right place for it. We were working in a very traditional format before, and this was interactive on a big scale.”

Festekjian said that since at first no one understood the vision, it had to be financed privately, but now that people understand what is possible, hopefully the government will become involved on a bigger scale. The infrastructure was not yet in place so there were many logistical issues. She said that even the professional tax accountant firm they hired, with specialized lawyers, did not know all the rules. Sometimes there are no rules in place. The notion of non-profit is also very different in Armenia than in the US, she stressed, while the art fair was one of the first examples of combining commercial and non-profit behavior.

ARMENIAN OPERA
Arts and Culture: Causes Worth Fighting For
Prior to the 2019 art fair, the organizers plan to do small events and lectures to keep the art fair in people’s minds, while they contact more international organizations and people in the field. In the future they might try to represent the Armenia Art Fair at other international fairs. Furthermore, Festekjian said, this year “we have seen artists who should be in fairs in Miami or New York, and we are now trying to help make these connections for several of them.”

Aside from support from Raffi and Nina Festekjian, the primary outside private donors for the fair were Nazareth and Nila Festekjian and Carolyn Mugar. Beeline was the main corporate sponsor for the fair, and support was received from the Goethe Institute. Yerevan City Magazine and Regional Post Caucasus magazines promoted the event. A number of other organizations as well as the Armenian Ministry of Culture provided some financial assistance, transportation or refreshments. 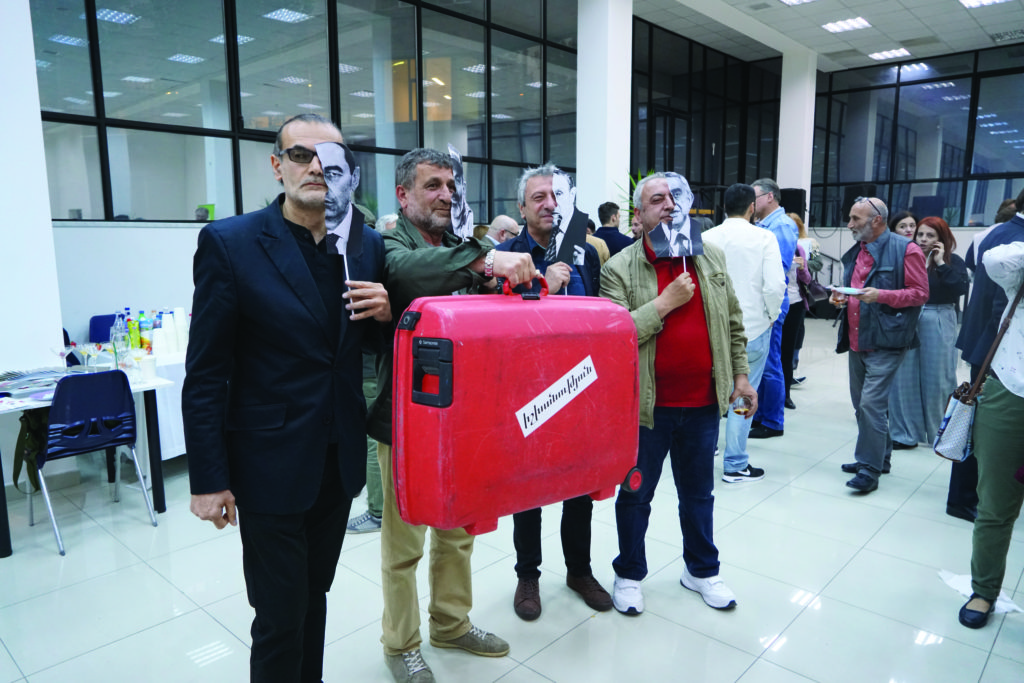 “Power is a suitcase,” performance by artist Samvel Saghatelian, at left, with group (photo: Aram Arkun)