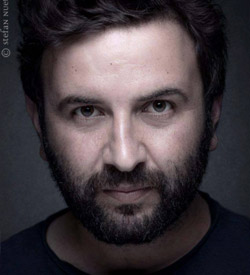 Born in 1980 in Al-Hasakah, Syria, Daoud graduated from The Fine Arts Centre, Al-Hasakah in 2002 and the Faculty of Fine Arts, Damascus University in 2011. His work is in the collections of the Sharjah Art Museum, UAE and The British Museum, UK, amongst others. He lives and works in Vienna, Austria.

Daoud has said “My paintings are for me a kind of rebellious reaction to all the fighting that is going on all around the world… to pain and cruelty… They are also an inner monolog about my despair.”

His small-format black and white works are home to clawed and toothy fabulous beasts, though they often seem flattened and constrained. His large-sized, bright-coloured paintings and drawings are exploding with vibrating marks and free colours. The meaning is ambiguous, figurative elements flow into abstract ones. A cast of characters seem to fly, swim, jump in and out of suitcases, sail in a boat or coffin. Are they memories of the past, artifacts from the present, or fearful imaginings of the future?

Daoud has regular solo shows in Austria, along with solo shows in Denmark, Turkey, Jordan and Syria. His work has been selected for many group shows internationally, such as Pushing Paper: Contemporary Drawing from 1970 to Now at the British Museum, London in 2020, and The Future of Painting at Essl Museum, Vienna in 2014. Other venues have included New York, Tunisia, Istanbul, France, and Sweden.