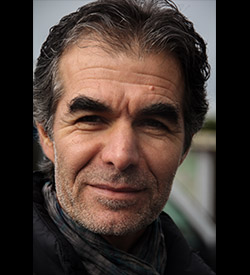 Adnan Abd Al-Rahman
Adnan Abd Al-Rahman was born in Al-Hasakah, Syria in 1969, and studied painting at the University of Damascus until 1998. After graduating, Al-Rahman taught drawing and oil painting for over a decade at the Schell Cultural Centre, (where he also had several solo shows) in Damascus, and the Russian Cultural Centre. He now lives and works in Germany.
The poet Ali Jazo has described Al-Rahma’s paintings as having a “richness of austerity…he offers what is delicate yet simple.” His imagery is mysterious, as if remembered from a dream. Faces, landscapes, and figures sleeping under a blanket often re-appear, sometimes merging, one into the other. Trees looking like burnt match sticks are scattered across a bare plain under a heavy sunset. But hope still appears, perhaps in the form of intense violet flowers. He has written of his struggle with the blank canvas
“When the norms become killing and other foolishness, you find yourself leaving this land with its teachings and holy scripts…you replace it with a few centimetres of whiteness. A whiteness of doubt…Is it a reshaping of places stolen from you ,or is it a scheme to keep lives and fates at bay from death?… you aspire for it to be a home beyond the oblivion in the north, the memory in the south, with a hug or two and some kisses…”

His work has been seen in group shows in Washington DC in the USA, Marburg in Germany, Sulaymaniyah in Iraq and Amman in Jordan, as well as Damascus galleries such as The Freehand Gallery, Rafia Arts and the Russian Cultural Centre.