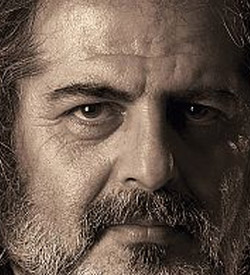 Moualla is an artist with a wide range of talents. As a child, he and his brothers would put on plays with elaborate sets that used props from their house, and as an adult he designed numerous productions for the Syrian National Theatre. He studied classical calligraphy, graphic art, and was one of the first of his peers to introduce performance into his work. He is celebrated for his beautifully painted and textured canvases, with expressionistic and calligraphic brush strokes.

He has a theatrical sense of composition and colour. He explores the relationship between individuals and societies, blurring the boundaries between past and present, reality and fiction. He described one of his most common themes;

“The crowd is part of my soul. Painting is a crowd of colours, strokes and expressions. I worked a lot on the subject of the herd and the individual, the individual as a prophet, or a criminal, a leader or a creator. Our history is full of individual heroes or dictators.”

His many solo exhibitions include; Grey Ash at the Green Art Gallery, Dubai, UAE in 2011, Word: The Body of the Dialogue, Centre of the Arts, Athens, Greece in 2010, and Arts & Literature, National Board of Culture, Kuwait in 2001.