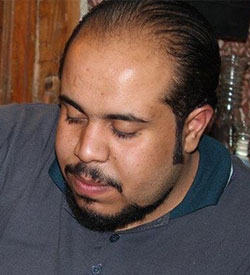 Akil Ahmad was born in 1988 in Jarabulus, Syria. He graduated from the Faculty of Fine arts in Aleppo and currently lives in Beirut, Lebanon, where he practises calligraphy, poetry, music, painting and live performance. He said

“I was introduced to Arabic calligraphy when I was about 10 or 11 years old, and during middle school I learnt all the primary calligraphic types. Then in high school I started understanding each letter as I painted it. I began perceiving letters in a new, different artistic way”

His emotion and nostalgia for Syria are present in all his paintings, mixing with the culture of Lebanon.

“I came to Beirut, loaded with memories from Aleppo and Damascus… the beginning was a bit hard but the general message of Syrians to the world is a message of peace, regardless of race, political affiliation or ethnicity”

In his paintings he draws on his extensive knowledge of the history of Arabic script, classical Arabic poetry, and his academic and philosophical studies of each letter within Islamic culture. Research into natural papers and inks also occupies him. Arabic musical Maqams (plural Maqamat) are a major inspiration.

These are traditional musical and vocal phrases, that once learnt can be used as building blocks for compositions and improvisations. It is sometimes said that each maqam evokes a specific emotion. Maqam Rast is said to evoke pride and power, maqam Saba sadness and pain, and maqam Hijaz evokes the distant desert. Akil translates them from an audio pattern to a visual pattern. He explains

“When I hear a voice inside me, I try to hold all these moments of ecstasy and invert them into a letter, a word, an optical language.”

Akil’s solo exhibition The Forty Maqamat of Love was held at the Dar Al-Funoon gallery, Kuwait in 2018, and in the same year he performed In the Presence of a Letter at the same venue. A year previously he had a two person show Maqamat with Fadi Alouayed in the Gold Souk, Beirut, Lebanon. In 2015 a solo show was held at The City Theatre, Nuha al-Radi Hall in Beirut. His work has been seen regularly in group shows; in the Artistique Gallery Doha in Qatar, and in Damascus and Beirut, including at Aleppo University, The Arab Heritage Institute, The Venue Gallery, Art on 56th Gallery, and in the Annual Syrian Ministry of Culture Exhibition.

He has shown at The Sharjah Calligraphy Biennial, UAE in 2014, 2016 and 2018, at which he was awarded the prestigious Al-Burda Prize for Calligraphy, by UAE Ministry of Culture. His artworks can be found in private collections in Syria, Lebanon, Kuwait, Saudi Arabia, UEA, Qatar, USA, Austria and Ireland