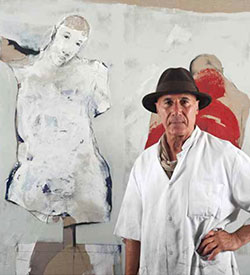 Born in 1952 in North Syria to a Kurdish family, Bahram Hajou travelled to Baghdad in the early 1970s to study Fine Arts. He later moved to Prague followed by East Germany, West Berlin, and finally studying at the Dusseldorf Arts Academy. He lives and works in Münster, New York and Paris. An artist with multiple identities, Syrian, Kurdish and German, he sees himself as a citizen of the world.

Hajou paints the bodies of men and women in countless configurations, at times lost in space, paralysed, neither separated nor together, always looking to the horizon. He expresses deeply felt existential pain, and the need for people to love without fears and taboos. There is a silent dialogue – language without language. The body language expresses sadness, numbness, and lack of understanding.
His work is courageously exposed and honest. His women emerge as strong. The men bear his unmistakeable features. Through self-analysis he deals with self- Identity, relations with the other, love versus hate, affection versus rejection, and every emotion in between.

Backgrounds are mainly neutral, with fluent outlines executed with freely in black. Patches of yellow, blue, violet, orange, red or green bring the painting to life. Bahram Hajou’s painterly language is delicate, yet full of energy. In 2014 Hajou was awarded the prestigious Henry Matisse Prize, earning a full-page feature in Le Monde and widespread recognition in the art world.