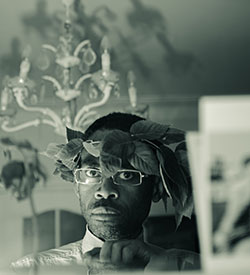 Chris Ward
Chris Ward the artist, is a Londoner. A self-taught photographer from an early age, his images have been published by such as Financial Times Weekend, Time Out and Evening Standard. He has done commercial work in Fashion and Music, including The MOBO Awards. In the 90s he wrote features on photographic artists such as Rotimi Fani-Kayode for Creative Camera magazine.
In the late 1990s and early 2000s as one of the East London photographic collective The Group, in studios at Bromley-by-Bow, he helped develop a series of photographic happenings that culminated in impressive exhibitions of The Group’s signature extensive photographic installations.

The Group, inspired by Satish Sharma’s 1997 Street Dreams, Contemporary Indian Studio Photographs Exhibition, where Sharma had collected hundreds of images from defunct Indian photographic studios. Never viewed as a collection, each image showed that whoever entered the studio set, used the props and became the person of their aspirations. The set endured unchanged for decades and the magic created by the various sitters created a strongly Indian vernacular in studio portraiture. The magic actually happens when you see hundreds of these images at the same time in the same space laid out like tiles. The sitters as characters in their own fantasies in a studio.

“Turning the idea on its head, we collected props and built sets for people to join a “happening” we’d created. On the set with its props, people did anything they felt inspired to do. We took their portraits. Hundreds of portraits, taken with an identical point of view, lens and camera position, became giant installations. Hundreds of prints tiled over large surfaces, notionally the same but, each one a magical drama from the minds of their sitters.”

As a guest artist with another group of London artists curated by Ellie Howitt and Anika Carpenter as “Pistols and Pollinators” under the umbrella “Accident and Emergence” Christopher was invited to collaborate with an artist from another medium. He worked with poet Katrina Naomi on a multimedia piece constructed over a day on a heuristic walking loop of Brixton in South London. This installation combined Katrina’s poetry and spoken word with cycles of images from 12-hours of collaboration.

Despite such teamings and pairings, his practise is mostly solo work. He identifies the drama in the mundane, where magical moments are fleeting and often unnoticed. Finding and seeing these “accidental still lives”, turning the play of light or, interaction of textures into intriguing chiaroscuro and abstractions, he shares the pleasure of “just looking” with the viewer.

Ordinary earthenware glazed jugs are magically lit from within. Then as the level of lighting is altered reflections of a home become revealed on and around it. Vibrant colours and concentric rings of yeast on unloved windfall pears become sculpture. The Rococo swirls and Gothic tracery of cast iron in two adjacent garden seats create a new more powerful dialogue. A fruit cage whose inhabitants are part used, resembles a section from Dutch Painter, Jan Davidsz de Heem’s Still Life with Ham, Lobster and Fruit. c. 1653

Ward’s work has been seen most recently, in Litehouse Gallery’s Home: Through the Artist’s Eyes, in 2020, as well as in commissioned storefront installations in Covent Garden and as part of a site specific installation with The Group, at London Football Club Charlton Athletic.