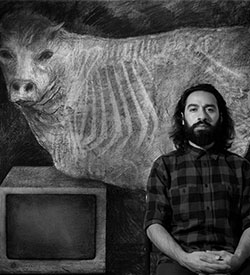 Al-Hamwi was born in 1986 in Damascus, Syria, graduated from the faculty of Fine Arts, Damascus in 2010, and now lives and works in Berlin, Germany.

Al-Hamwi’s multimedia practice encompasses painting, sculpture, installation and video, though always focussing on the human experience of war. In his early work he made visible the latent violence inherent in the construct of society. This became more urgent when actual violence began to take place around him in Damascus in 2011. He explores our dormant violence and desires, which in the right circumstances can become actualised.

In his series of paintings Society – 180 degree he uses hybrid animal/human figures complicit in the everyday brutality of wartime. They are horrors of war personified, captured in ordinary acts such as giving a gift or answering the phone. The absence of background creates a feeling of flatness, both spatial and emotional.

He explains “My art explores the lack of humanity in the Syrian war. It is meant to expose men and women debased to their bone structure.”

Al-Hamwi has had solo shows at the Art House Gallery and at the Faculty of Fine
Arts in Damascus. In 2019 he had a two-person show at CAP Kuwait. Since that time he has also been presenting his performance Sugar Forever, in the Alfred-Scholz-Platz, Berlin, the Kunstverein Tiergarten, also in Berlin, and the De Warande Expo, Turnhout, Belgium. His work has been included in many group shows, including in the 33&5 gallery, Amsterdam, the Reach Gallery, Canada, the Arab World Institute and Barjeel Art Foundation, Paris, CPH:DOX, Copenhagen, The Damascus National Museum and The Victoria & Albert Museum, London.