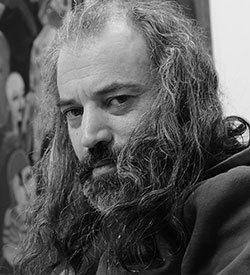 Ghylan Safadi was born in Sweida in 1977. He graduated from Damascus University’s Faculty of Fine Arts in 2000, In Sweida in 2008 he founded the Kameh Institute, which is committed to teaching theatre and arts for children. He lived and worked there until 2012, when he moved to Beirut, Lebanon. Prior to this, his work was characterized by strong colours, but that changed with the escalating war and horror in Syria. As he put it one of his interviews
“I could not paint in colours anymore…The war, the violence, the revolution, makes you feel what’s inside of you, the pain makes you draw more real…The artist is like a messenger… All that surrounds me is colourless, only scorched memories come to me and I try to gather their shreds on my canvas before they are blown away … Right now is such a hard time, but after… I think something new is coming.”

His powerful graphic line render mysterious characters, and even party scenes take on an ominous atmosphere. Art became Safadi’s way to salvage the memories of faces, friends, dreams, and experiences amidst the destruction of war in Syria. Safadi’s images are a first hand testimony of pain, despair and uncertainty. It shows how war feels, and makes it a little less easy for us to turn our heads away.

Safadi’s works have been shown in international solo and group exhibitions including the Arab World Institute in Paris; Lighthouse Mobile Gallery in London, Paris, Germany and Japan; and the Bahrain Art Fair. His works are housed in collections in Syria, Lebanon, France, the UK, UAE, Bahrain, Kuwait and the US.