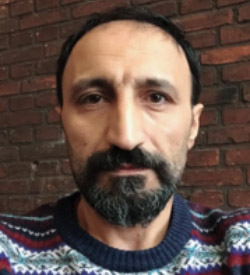 Hasko Hasko
Hasko Hasko was born in 1973 in Aleppo, Syria and graduated in 2000 with a BA in Fine Art from Damascus University. He fled the Syrian war, first to Turkey, and finally settling in Denmark in 2014.

His paintings focus on nature, animals, and mythical figures inspired by Mesopotamian cultures.
He believes that beauty is in a constant battle with ugliness and that the pure things in nature remind us all of our origins. He says –

“In the beginning my story with art was an innocent one, as I used to live in the countryside and spent most of my time on the plains, I was connected to nature since my childhood … I paint nature and its creatures automatically, away from human sin and filth … I enter the world of animal dreaming. My creatures appear innocently imposing their inevitable existence on my canvas. This is my story with Nature… our first Mother“

His paintings are treated mainly in acrylic paint or mixed media, with low-key colours and defined brushstrokes in compositional clusters. Some areas of the canvases are overlayed with images, one on top of the other, roughly drawn over and over. Typically, larger swathes around the subjects are then layered with broad, frenetic strokes, sometimes almost whited out. Hasko has explained –

“When I gain freedom by painting, the shapes become more and more beautiful and honest, considering that the attempt to show the greatest beauty possible is in itself a form of resistance against the atrocity of (the Syrian war) … when I stand facing the painting I transform from a human being into an instinctive creature”

He has been exhibiting solo from 1993 to the present, his many shows being in Germany, Denmark, Lebanon, Syria, Qatar, Iraq and Turkey, including at the National Museums of Sulymaniya in Iraq, 2004, and of Aleppo in Syria, 2005. His work has been seen in numerous group shows internationally, including The Roskilde Contemporary Art Museum in Denmark, Ahmed Art Gallery in Turkey, World Bank Gallery in the USA, Art Castle Hamburg in Germany, and many venues in Syria and Iraq.

Hasko also wrote and illustrated A Perilous Journey, which chronicles his dangerous voyage and the paths of two other Syrian war refugees traveling to Europe. It was launched at The Nobel Peace Centre in Oslo and serialized in The Guardian and Aftenposten newspapers in 2015.