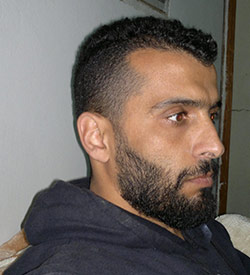 Houssam Ballan was born in 1983 in Sweida, Syria where he currently lives and
works. He graduated from the Faculty of Fine Arts in Damascus in 2005, and has also trained as a mural painter.
In his typical and charming painting titled Wedding we see a family gathered, posing as if for a cheerful family snapshot, a happy memory despite the troubles in the country. Ballan’s works may depict people and society in the midst of daily conflict, yet there is no violence in them. He says “I love to watch people and capture them on my canvas. I am interested in the timeless condition of humanity”
A painting is not based on just what one sees, but the understanding of what one is seeing, and the emotions it evokes. Just like when we try to remember a person or occasion, we do not remember photographically, but through our understanding and feelings. Ballan minimalizes detail in his work, ignores original dimensions of figures, and adds light by removing shadows. As he explains, “In my work, time is ambiguous… I have resorted to erasing anything that might point to a specific date or era … the backgrounds they are set against – whether plain, or halls or theatres – suggest then a psychological space. I want to take the viewer into a place out of time…This creates a feeling of ambiguity, of a blurring, while colours evoke various emotions.”
Byzantine Icons, Roman sarcophagi and Cubism are two influences present in his work, but he hungrily draws on imagery from across time to create something new.
In his search for what he has described as what is real, beautiful and natural, he tries to present concepts of existence and life, rather than concepts of time and reality.
“The topics I paint are the result of the environment in which I grew up, at home with eight brothers, in school and now what I see on the street…Sometimes, I am inspired by an image in a newspaper or a story I heard …photographs from the 1970s and 80s, even medieval art. Anything can be a source of inspiration … such as a silent Roman statue, a vivid figure, a pair of jeans, an iconic face, etc. All of these elements become a unified compound image.”
His works can be found in numerous private and public collections, and his solo shows include Subconcious Reality at the Fann a Porter Gallery in Dubai, UAE in 2019 and If I could See Like a God and Paint Like an Animal at the Mark Hashem Gallery, Beirut, Lebanon in 2014. He has been included in numerous group shows, such as The Cairo Biennale, Egypt; Manara Arts & Culture, Amman, Jordan; the
BBA Gallery, Berlin, Germany; and the Hafez Gallery, Jeddah, Saudi Arabia, all in 2019. In previous years he has shown in exhibitions including at Atelier Stories, Paris, France; Arab Cultural Centre, Sharjah, UAE; Ayyam Gallery, Damascus, Syria; and the Arab Cultural Centre, Sharjah, UAE.