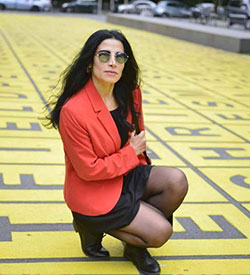 Also known as Emman Al Hasabani
Iman Hasbani is a multi-media experimental artist born in Swidaa, Syria. She obtained her Masters Degrees in Fine Art from Damascus University in 2007, and in Dialogue Through Art from the University of Beirut. Since 2008 her work has been concerned with social issues and the lives of women. From 2011 for two years she did not do any of her own personal work, instead focusing on using art therapy to help children affected by the war in Syria. She now lives and works in Berlin.
Some of her themes are memory, dreams, transience and the loneliness of women in a closed society. In her early works she collected stories of women who had committed suicide or died alone and whose diary entries had been found posthumously. Hasabani examines the poetry of everyday life, but at the same time questions what “space for dreams” remains in a world that is dominated by power politics, consumption and virtual media.
Her installation piece Separation, 2019, includes a pillow, real hair, and photographs of young girl in a white dress walking away from behind, a ‘re-enactment’ of a dream or memory. Pencil drawings, worked over and over until sometimes the paper is pierced, show a girls’ hair from the back. She remembers a snowfall on her family home when she was aged ten –

“Silence and the white made me want to stand under the falling flakes of snow and look at the sky and on the snow falling quietly on me and on the place.
I told my mother that I am going out, she screamed “You cannot, if you stand under the snow, something bad will happen”. I didn’t understand … I still remember the fear of that moment (being) taken away from me, as I was just about to step out of the house bare foot, to the garden full of trees on that snowy night, to the spot where I always wanted to be.

“The first few months in Berlin, I was flying in my dreams, visiting different unknown places, going back to that garden, to that place where my grandfather said: “Your First Home that you came from is buried here, under the Eucalyptus tree … I see myself ten years’ old, among the trees of my spacious old house, always with my grandfather. I am stuck there with all the details of that time.”

She has frequently presented and performed work internationally, including at; Art-Lab-Berlin, Germany in 2017; Aley Artists Residence, Lebanon in 2013; Artellewa Art Space, Cairo in 2012; International Videoart Festival, Marseille, France in 2010; Museum of Modern Art in Latakia, Syria in 2009; and PEUA in Valetta, Malta in 2008.
Her work is represented in numerous public and private collections in the Middle East and Europe. She has received prizes and awards for her work, including 1st prize for painting at the 9th International Miniature Art Biennial, Quebec, Canada in 2008.
https://imanhasbani.com/