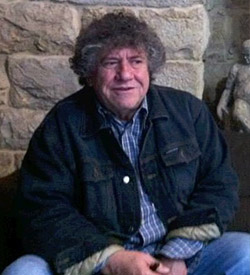 Jaber Alwan
Jaber Alwan was born near Babylon, Iraq, in 1948. He studied first at the Institute of Fine Art in Baghdad in 1970, before travelling to Italy study at the Rome Academy of Fine Art, the city where he still lives and works.

The ancient city of Babylon is only a few kilometers away from Alwan’s birthplace and imprinted itself into his imagination. As a boy, he would mould clay from the riverbank into figures and statues to express his creativity. Naturally, he studied sculpture, but later in Rome was drawn to colour, and so turned to painting. His painted figures, which are typically alone, demonstrate his mastery of solid masses.

Since 1975 Alwan has had numerous solo shows across Europe and the Middle East, a few of which were at the Hall of Plastic Artists Association in Baghdad, Iraq in 1977, the Ravenna Art Museum, Italy in 1997, the Civic Museum of Vieste, Italy in 1999 and the Museum of Modern Art in Kuwait in 2005.