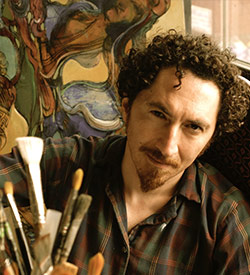 Kevork Mourad
Kevork Mourad was born in 1970 in Qamishli, Syria, and gained his Masters degree from Yerevan Institute of Fine Arts in Armenia. Now lives and works in Brooklyn, NY, USA. His lyrical, multi-layered drawings centre around Architecture as an expression of culture. He explains

“Many of my ideas were inspired by my grandparents’ and parents’ stories, who told of living in a time in which Jews, Muslims and Christians lived together in Qameshli, in Aleppo, and in Damascus. (Syria) was home to three generations of my family – refugees of the Armenian genocide –the culture that has most inspired my art and aesthetic… explore the beauty and the recent tragedy that has defined this place, and open outward with hope for a reconstruction that honours the historical and cultural wealth of my homeland.”

Alongside his drawing practice, Mourad employs a technique of projecting spontaneous live drawing, and animation, in concert with musicians, dancers and poets – collaborations in which art, words and music can harmonise with one another. These collaborations have seen him work with numerous musicians and venues, including Yo-Yo Ma and the Silk Road Ensemble, the Brooklyn Museum of Art, le Festival du Monde Arabe in Montreal, the Nara Museum in Japan, the Art Institute of Chicago, the American Museum of Natural History, the Metropolitan Museum of Art and The Walt Disney Concert Hall.

In 2019 he had a solo exhibit at Tabari Artspace in Dubai, and also was in the group show Latitude, in Yerevan, Armenia. The following year he showed in the Asia Society Triennial in New York. In 2016 he won the Robert Bosch Stiftung Film Prize, and he premiered his animated film 4 Acts for Syria at the Stuttgart Animation Festival.

His works are in the permanent collection of the Arab World Institute in Paris, and he has been commissioned to make sculptural drawn installations by the Aga Khan Foundation and Harvard University.