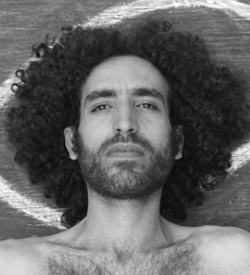 Khaled Al-Boushi
Khaled Al-Boushi was born in Syria in 1985, and graduated from Damascus University with a degree in Fine Arts in 2009. Since 2014 he has lived and worked in Germany.

Inspired by Sufi philosophy and influenced by the Abstract Expressionists, Al-Boushi goes back to the core elements that compose every artwork: the dot, the stroke and the circle. He says

“When I begin work on a painting, I go back to the primary visual element that forms shapes – the dot – and then experience the possible transformations to which it might be exposed. During this process each painting simultaneously depicts different visual results and situations; stillness and movement, density and vacuum, creation and disappearance. In this co-existence of opposites, shapes experience confusion and constant change. A shape faces an existential crisis, and deep within it lays nothingness…those shapes reflect the actual situation in which I live since I left home”

The organic circles suggest dancers, the ever- changing wheel of life or the grandeur of the universe. His work is minimalist and unpretentious, yet full of life.

His solo show Dot / Stroke / Circle was at the Art Circle Gallery Beirut, Existentialist Sufism at the Goethe Institute, Damascus, and 7 Days at Rondo, Graz, in Austria. His work is in the collections of the Federal Foundation for Flight, Displacement, Reconciliation in Berlin, and the World Bank Headquarters in Washington D.C. His work is seen in numerous group shows across Germany.