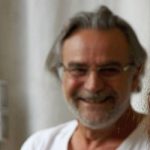 Malva was born into a shepherd’s family in 1952 in near Al-Hasaka in Syria. Self taught, he drew posters for a local cinema whilst dreaming of becoming an artist. Aged 17 he travelled to Damascus carrying 35 of his oil paintings. He was immediately offered an exhibition at the Ministry of Education, creating a sensation, with radio, television and the press reporting on the event. Over the next ten years he lived, worked and performed his military service in Damascus. During these years he exhibited often in Syria, Egypt, Baghdad, Sofia, Moscow, Bucharest, Belgrade and Budapest.

He left the city in 1978 for Vienna, where he become influenced by European impressionism. Though originally isolated in a new homeland, with a new language, where the galleries didn’t have any interest in his paintings, he eventually triumphed. He worked here until he died in 2015.

“With time, I have come to recognize that I am looking for myself in the landscape, and when I find myself, I paint it.”

“I was born to be a painter. My background worked against me, but it only made me stronger. The life of an artist is difficult, but there is no reason to give up …I will paint until my last days on earth because I must paint to exist”

Over a long career, he experimented with a wide range of ideas, from neo-impressionist light-filled paintings of willow trees, rivers and flowers to dark images of state violence. From Expressionism to primitive art inspired by ancient cultures. Litehouse Gallery has work in a range of his styles.
Malva has had numerous solo exhibitions in public venues such as The People’s Art Hall in Damascus, Syria in 1976, The Austrian Central Bank in Vienna in 1989, The Rostock Villa Museum in Klosterneuburg, Austria in 1990, The Art Forum Gallery in Vienna in 1993, as well as commercial galleries across Europe, The USA and the Middle East. Private collectors are scattered across the globe, including Russia, Canada, Sri Lanka, and Japan as well as Europe and the USA.