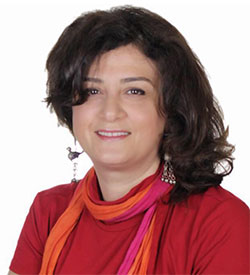 May Hamdan
May Hamdan is a self-taught painter who has emerged in the ranks of serious painters over time. In 2007 she held her first exhibition in her own home studio, then in 2008 she was part of the exhibition “Varianti” in Beirut. In 2009 she took part in a larger Christmas exhibition in Saifi Village, Beirut. She held an art show in December 2011 also showcased in her home studio in Hamra.‬‬ In May 2015 she had a solo exhibit at Zico House in Sanayeh, Beirut, Lately in May 2017 she had another solo “Spectators” at the gallery Plus or Minus 10 in Beirut.

May currently lives in Beirut and enjoys working in the studio located in her home. Her work includes paintings with mixed media, mostly acrylics and pastels. She also enjoys making playful and whimsical fabric patchwork pieces for bags, cushions, wall hangings, quilts, and curtains.