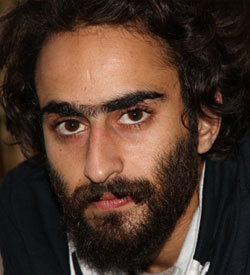 Mohamad Labash
Labash was born in Dara’a, Syria in1989, and graduated from the Faculty of Fine Art at Damascus University in 2013. He lives and works in Beirut, Lebanon.

His oil paintings seem to show faces or figures, battered and bruised, sometimes to the point of erasure. Though he has studied Goya and Francis Bacon, he has stated that nature is his inspiration and his painting is a pure, spontaneous act. His knowledge, and mastery of technique, are tools that enable him to utilise the most important aspect of creating work – emotion. His paintings and drawings are charged with a chaotic energy. Heavy blocks of deep colour press against each other and try to obliterate each other. These intense, semi-abstract compositions invite the viewer to peer into the shadows. Labash describes his process of making art –

“ Here is where the fun, the query, the insanity and the path to dreams all begin…it is a state of indulgence…a rupture from reality and the creations of an alternative universe…a painting is like a child with relentless questioning, a quest, discovery and trial…”

Even before the troubles in Syria his subject was Violence – recent events have just confirmed his vision of human evil. His aim is to shock us by revealing the darkness that is a part of our being.

Labash has exhibited internationally, being included in shows in such diverse venues as The World Bank in Washington DC, USA, Villa Paradiso in Beirut, Lebanon and the Archaeological Institute of Kashihara in Nara, Japan. His work has also been shown in London, Dubai, Bahrain, Milan, Geneva and Paris.