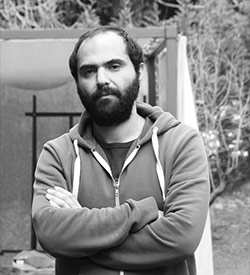 Mohamad Omran
Mohamad Omran was born in 1979 in Damascus, Syria. Here he studied sculpture for his BA in Fine Arts at the University, and in 2009 he obtained an MA in the History of Modern Art in Lyon University in France.

The figures in Syrian artist Mohamad Omran’s work represent a side of humanity riddled with flaws, sometimes monstrous, sometimes mundane. The motif of the tortured human being has been a central theme. Influenced by the war in Syria and his vision of humanity, he has created several series of works, from sculptural busts of distorted faces to depictions of animal metaphors to drawings of exhausted ordinary people. He is able to evoke empathy, disgust, anger in his work with directness and cynicism, yet sometimes reveals a dark humour, wavering between darkness and lightness.

He has had many solo shows across France, Germany, Syria and Lebanon. In addition to these countries, his numerous group shows have included Jordan, Kuwait, Denmark, Belgium, Turkey and the USA.

His work is represented in many private and public collections including the British Museum in London, the Arab World Institute in Paris, The Ministry of Culture in Damascus, The Royal Museum in Amman, and the Attassi Foundation in Dubai.