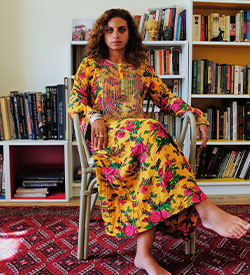 Zayed was born in 1979, in Cairo, Egypt growing up between Egypt and the United States. She is a self-taught photographer, living and working between Cairo, Egypt and London, UK. Zayed co-curates the popular Arabic Typography blog on Instagram, cataloguing found Arabic typography from all over the world.

She is an avid reader of philosophy and history, including antique texts, and her interest in the art of calligraphy grew from this. Zayed is fascinated by how heritage, tradition, culture and identity are perceived, and how they are continually changing. Through her extensive travels around Egypt, she began to chronicle its ever-changing landscape, urban scenes and people. She describes her Egypt as

“a place where all the time you are confronted by a contrast between the sacred and the profane…in Egypt ‘God in Great’ is everywhere (painted) on houses, on walls, on shop fronts, …the name Allah is inescapable, and it acts like a constant reminder”

She started documenting examples of vernacular calligraphy and graffiti known as Khatt, building a visual archive that led to her solo show Khatt: Egypt’s Calligraphic Landscape in Kodak Passageway, Cairo. This was followed by her first photobook, of the same name, published a year later in 2019 by Saqi Books. She also became obsessed by Egyptian trucks.

“The truck itself becomes a medium for self-expression, essentially the driver’s heroic alter-ego, producing writing which includes expressions of faith, movie and song quotes, witty declarations, the driver’s stances on love, women and life, declarations of advice, warnings and anything else that reflects the driver’s philosophy, dreams and grievances, essentially his public voice. I love chasing trucks on the road.”