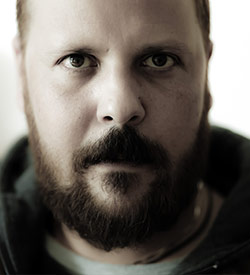 Omar IBRAHIM
Omar Ibrahim was born in Sweida, Syria in 1978 and obtained a BA in Fine Art at the University of Damascus in 2002, and followed this up with studies in advertising design and interior design. As well as an artist, his work as an art critic, editor and consultant took him all over the world. He lives and works in Paris, France.

His deep and rich colours are not just beautiful to the eye; he uses colour to symbolise states such as black for the exterior world and white for the spiritual world. Syrian culture and history has particularly influenced his pieces with recurring symbolic elements such as sagging trees, tired birds, dogs, and empty houses.

Ibrahim’s art is a way to explore his own thoughts and emotions of the Syrian conflict. He acknowledges that painting for him is a way to create his own world in order to heal the wounds of his soul. His un-real art represents an idea of the real Syria: its struggles, its needs and its remaining hope.

He has been exhibiting in group shows since 2001, regularly in Syria, but also in California in 2002, at the Monatako Festival, Tokyo in 2006, at the Home Gallery in Paris in 2010 and at ArtLab Gallery in Beirut in 2013.

In 2010 he had a solo show in his hometown of Sweida, at the Alfa Gallery. His work is held in many collections internationally, including in Japan, the US, the UK, Dubai, Egypt, Lebanon and Syria.