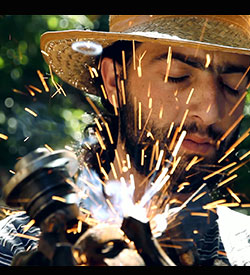 Steel sculptor Sari Kiwan was born in Swedia, Syria in 1988. In 2011 He graduated with a BA in Fine Art from Damascus University. He moved to Germany to study at Halle University, and he now lives and works in that country. In 2019 he was awarded the prestigious DAAD prize for foreign students with special academic achievements and remarkable commitment.

Having left Syria and arriving in Lebanon, his only available materials were scrap car parts. Their shapes inspired powerful statues of men and women in different postures of defiance and frustration. His acrobatic characters evoke movement and repose, in an inevitable alternation of balance and imbalance.

His most well-known work is Dancing on a Barrel Bomb which depicts a figure balancing on a red barrel. Here he references the barrel bombs that have been dropped all over Syria. In this sculpture of a muscled man dancing on the edge of a barrel soaked with blood, Sari Kiwan announces to the world that no amount of regime barrel bombs will stop the people from celebrating their revolution with dance.

He has had solo shows at 392RMEIL393 Gallery in Beirut and at Art Residence Aley, both in Lebanon. Two of his works have been acquired by Nissan Industries for their collection, and Man on Barrel was shown at Duke University in the United States as well as at a group exhibition in Villa Paradisso in Beirut, supported by UNHCR. Other group shows have been in Damascus and Beirut.