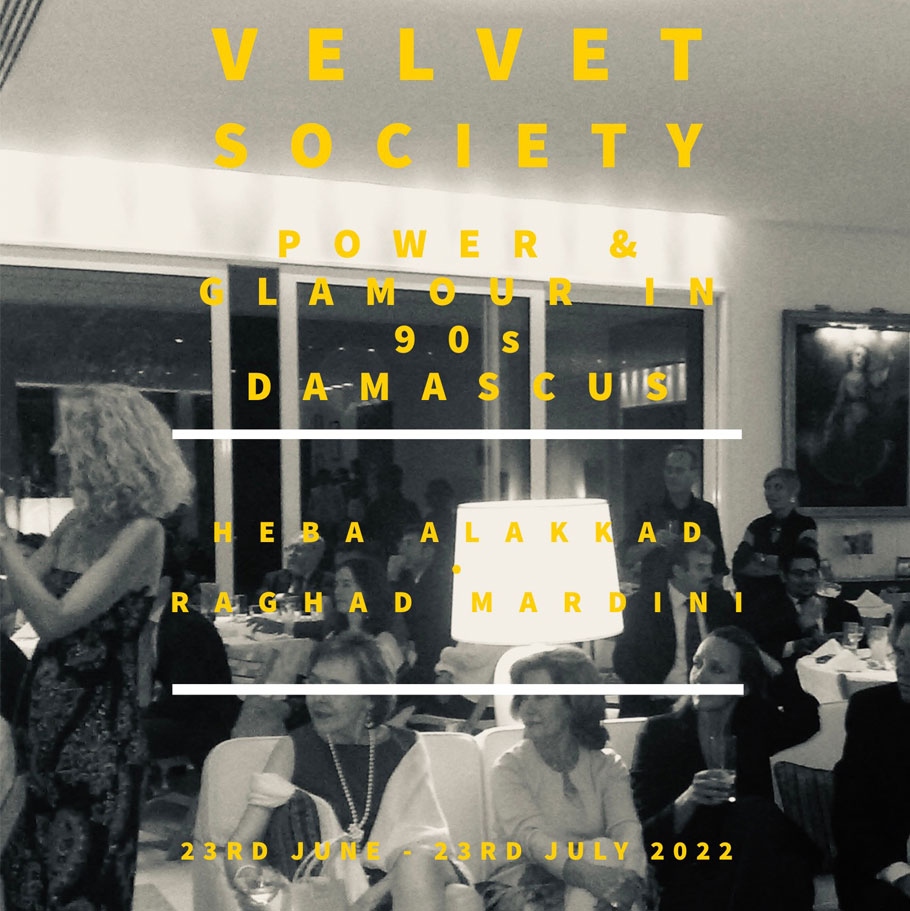 Litehouse Gallery is honoured to present Velvet Society, an exhibition displaying the creative acts of survival in fashion and fabric of two Syrian women, civil engineer Raghad Mardini and artist Heba Al-Akkad. The 90s fashion collection of Mardini, emanating from the wealthy and powerful class of the self-styled “velvet society” prominent in 90s Syria, will be juxtaposed with a range of vibrant artworks made in fabric and fibre by Heba Al-Akkad. A powerful dialogue will be established between these collections, to expose a Damascus of the 90s dominated by complexes of glamour and power, at once joyful yet troubled, wielded both by and against the women in question.

In 1994, civil engineer Mardini joined the “velvet society”, a figure of speech used across the region describing nouveaux-riches businessmen and political powerbrokers.  We glimpse this system through the perspective of one woman’s experience, Mardini, who by marriage was inducted into this rarefied echelon, and who, after many years enduring its alienating excesses and the coercions it placed upon her as a woman, rejected it.

Al-Akkad also lived in Damascus during this time. Far from being ensconced in the velvet society as Mardini was, Al-Akkad still grew up in a country where this male-dominated wealthy elite controlled the wealth and politics of her society. Likewise, in her own social position, she also experienced how power was concentrated in and wielded by men and used often against women. In an art that is highly personal and based frequently on memory, she works to disentangle feelings of loss and death, creating vivid pieces of art, where humorous imagery jostles alongside soulful longing and dark remembrances.

Clothing and fabric are a contested site of power for and against women. Dressed in glamorous clothes, the beauty of women is objectified and used as currency in the velvet society’s game of excess, male gratification, politics, patronage, and money. Yet clothing also helped women situate themselves within a confusing social order and often helped them function potently and formidably within its strictures, with glamour and female sexuality itself a potent tool. But more than this, fabric sheltered these women, was an outlet for aesthetic joy, harboured their identities, histories, and, over time, became a seat of their memories.

Mardini and Al-Akkad found each other in exile in Lebanon in the 2010s and soon struck up a friendship founded on a mutual desire for expression and to redefine the place of women in the society from which they came. Velvet Society is one result of that relationship, an exploration of how, for these two women in 90s Damascus, fabric dazzled, lured, sheltered, bound, concealed, and, in time, changed.